At 6:00 p.m., Thursday, May 19, Mr. David Wright Faladé will talk about his new novel, black cloud rising, at the new Albemarle-Dare College campus building and will be available to autograph books.

The book is a powerful fictional account of Richard Etheridge and the African Brigade, the unit of black freedmen who fought for the Union during the Civil War. The event sponsored by the Pea Island Preservation Society, Inc., Downtown Books and the College of the Albemarle will be the first literary event held in the new Dare campus building. A hall in the new building has been named the Richard Etheridge Warden’s Hall to honor the importance of Etheridge’s history and its links to the region.

David Wright Faladé is well known for his knowledge of Richard Etheridge. He co-wrote the popular non-fiction book Fire on the Beach: Recovering the Lost History of Richard Etheridge and the Pea Island Rescuers, a book considered a primary source on the heroic 11 October 1896 rescue of the schooner ES Newman by warden Richard Etheridge and his crew and the early life of enslaved Etheridge on Roanoke Island. He has long been considered a subject matter expert when it comes to the history of Warden Richard Etheridge and the Pea Island rescuers. His research played a key role in Keeper Etheridge and his crew was posthumously awarded a Lifesaving Gold Medal by the United States Coast Guard in March 1996 for the daring rescue of the ES Newman. Mr. Wright Faladé is currently Professor of English at the University of Illinois and 2021-2022 Dorothy and Lewis B. Cullman Center Fellow at the New York Public Library.

black cloud rising, a fictionalized account of Etheridge’s service during the Civil War years before becoming station watchman at Pea Island, offers the opportunity for a new perspective to consider Etheridge’s life and his quest for freedom. It is a dramatic and moving tale of men who only weeks earlier had been enslaved, but were now Union foot soldiers ready to fight their former owners. At the heart of the story is Sergeant Richard Etheridge, son of a slave and her master, brought up with few privileges but constantly called back to his place. The new novel has received rave reviews from The New York Times, The Philadelphia Inquirer, and Publisher’s Weekly.

Prior to the 6:00 p.m. main event, the Pea Island Cookhouse Museum at 622 Sir Walter Raleigh Street in Manteo will be open from 4:30 p.m. to 5:30 p.m. on May 19 and Mr. Wright Falade will meet friends and fans during this time. The Cookhouse Museum is a few blocks from the new College of the Albemarle-Dare campus building. The museum is dedicated to honoring the legacy of Etheridge and the historic all-black Pea Island Rescue Station commissioned as the nation’s first black warden in the US Life-Saving Service. A prominent life-size statue of Warden Richard Etheridge is located in the street roundabout next to the museum. 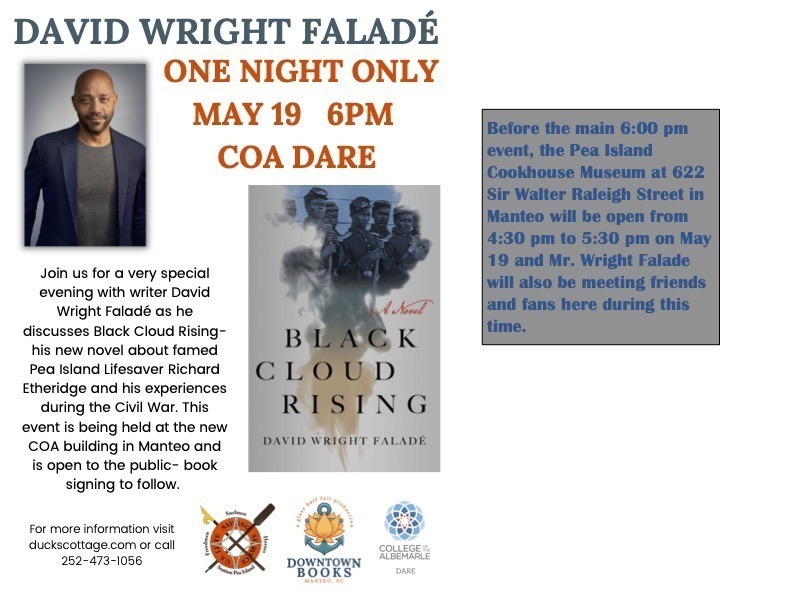