The Houston Grand Opera (HGO) presented its latest production, Snow day, December 9. This was a watershed moment, as the opera is an adaptation of a popular children’s picture book of the same name which centers around black characters.

Snow day, written and illustrated by Ezra Jack Keats, was first published in 1962 and is considered the first major children’s picture book to feature black people as the main characters, according to Texas monthly. The book tells the story of a little black boy named Peter and follows him as he becomes fascinated after seeing the first snow of the season. He makes snow angels, sleds, builds a snowman, and experiences the sadness of a melting snowball that he tried to keep with him coming home from the cold.

The children’s story was adapted into an opera by Andrea Davis Pinkney, who wrote the libretto, and Joel thompson, who composed the music. Early in the creation process in 2019, Pinkney and Thompson were introduced to Snow day like children themselves. Pinkney said it was one of the first books she had in her nursery when she was little.

“I remember sleeping with it like it was a pillow,” said Pinkney Texas monthly. “I was kissing Peter’s brown color; I was kissing seeing myself pictured on the cover of this book.

Thompson was introduced to the book by his mother, a schoolteacher, while they lived in the Bahamas. “It was fascinating for two reasons: I saw a child who looked like me and I had never seen snow,” Thompson told the outlet. “They were both foreign things that were also full of wonder.”

Pinkney, a New York Times best-selling author, described the challenges of turning a picture book, at just over 300 words, into a 60-minute opera that captivated an audience.

“Our first consideration was how to bring the story to life and make it theatrically vibrant,” said Pinkney. “The libretto seeks to give voice to Peter’s inner world and to the people who inhabit this world.” 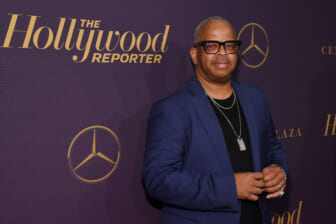 McMillon Raven, a studio artist (HGO), took on the role of Peter in the production, Omer Ben Seadia conducts, and the musical director of HGO Patrick summers direct the music. Snow day runs until December 19.

Production of Snow day comes after a new historic opera, Fire shut up in my bones, premiered at the Metropolitan Opera House in New York last September. With music composed by trumpeter and film composer Terence blanchard, it was the first opera by a black composer ever performed at the Metropolitan Opera, leGrio reported. Like Snow day, it was adapted from a book about a young black child.

Fire shut up in my bones took the writer’s memoir Charles Coup and poignantly told the story of a young black man struggling with childhood trauma as he sailed through the racist southern United States. The historic production was sold until its last performance in October.